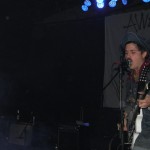 On Tuesday night I arrived at the Beaumont Club in Kansas City just in time to see The Black Lips take the stage. I spent the night immersed in shredding, spitting, sweating and downright nastiness. This was garage rock at it’s finest.

The crowd was disgustingly sparse for a Black Lips show. A band like this needs as big a riot as possible, because there’s nothing quite like Cole Alexander screaming into the mic to call you to attention. Although I do have to give credit to the rowdy group of fans that were front and center. They did manage to get a nice mosh pit going towards the end.

The band was fan-freaking-tastic. They decorated the stage with nothing more than a spray-painted backdrop, and occasionally pulled out some groovy sort of light. They really don’t need anything to gussy up the place, their music does just fine on its own. 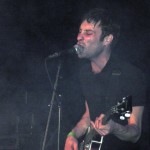 The crowd went nuts when the band busted out “O Katrina!” By this point Alexander was really prancing about the stage. He played guitar on the floor, in the air, with his teeth….while managing to jump up and down the entire time. Right after that song, they exclaimed “We’re going to play 5,000 more songs!” This was sort of a running gag throughout the night. Everybody knows garage rock consists of short songs, played as hard and fast as possible. So the band kept chiming in every now and then with phrases like “We’ve got at least….33 more songs!” and “I guess you guys are saving your energy, because we have about 564 more songs to go!”

The Black Lips did their best to relate to their young crowd. “We think if you’re under 21 and have to pay two more dollars, that’s bullshit! What if you’re over 21 and don’t drink?” At this point someone else in the band would pop in and say “You’re all equal to me!” 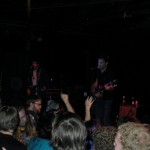 When the band pulled out “Bad Kids” the crowd just went absolutely ape shit. They ended on a high note, took their bows, high fived the crowd and left. They didn’t entertain us with an encore, even though the crowd chanted “One more song!” for a few minutes. But it doesn’t matter. Their new album “Arabia Mountain” isn’t even out yet and we got a big old dose of it on this night.

The band is still rowdy and fun as hell, but it just feels like they’re also getting a little wiser. I can’t wait to see where this album, and their globe-trotting tours, take them.

The Black Lips are headed to the Middle East, but first stopping in KC