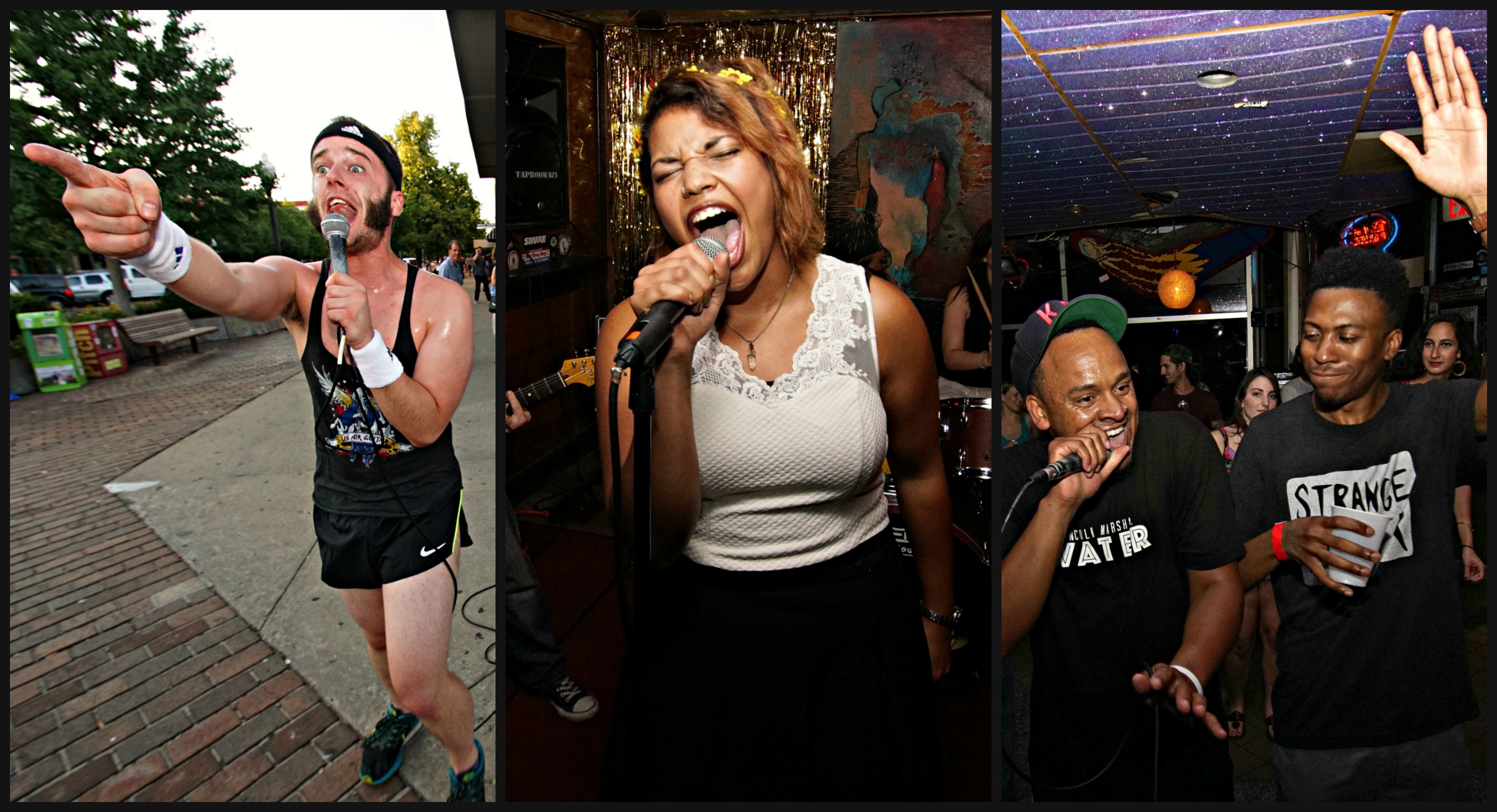 Five years into rocking the streets of Downtown Lawrence, and Field Day Fest still does not disappoint. Making it out to see all the performances felt a little more of a daunting task this year due to the sheer volume of acts on the lineup. We didn’t get to them all, but what we did see was more than impressive and should make any scenester proud. Here are some of the best things we saw at Field Day Fest this year.

It was really easy to dote on a band like Glue Chords. The band embodies everything scenesters tend to (sometimes) look for in a band. They’re new, they’re young, and their talent is enough to make anyone a little jealous. It’s almost not fair, how cool these teens come off, despite oozing teen angst. There’s something a little reminiscent of Nirvana in their music. Because the band is so young, the frontman’s voice still breaks when he talks. But when he starts screaming into the mic, it’s a different story. There’s no other like him around, and the future of rock in Lawrence is looking brighter every day.

We were happy to see Field Day Fest’s reach extend a little farther this year with more Manhattan bands appearing on the bill. Jade Archetype came from the Little Apple, but we hope they won’t stay away. Two sets into the festival, we were absolutely entranced. The soulful vocalist is a force, one you can’t take your eyes off of. The sass on this woman! You wouldn’t have known beforehand— she was so soft spoken. She’s got a strong set of pipes, with wails that turned heads in the Taproom basement. Combine that with the wicked guitar solos behind her, and you’ve got what was likely the most emotional, moody, and fierce set of the night.

The nice thing about punk rock is that really, it’s for everyone. So imagine the delight we saw at the festival when they decided to make one of the punk showcases early and all-ages. The evening was capped with a rowdy set from Stiff Middle Fingers (featuring the full lineup, thanks to a reunion with festival organizer Cameron Hawk). If you read this site, by now you know singer Travis tends to leave the stage and bolt into the wilderness during the set. But it’s still a site to see every time, especially when it’s during the day. There’s nothing like watching families take an evening stroll down Mass Street, then watch a group of punks bust out of the Replay and storm the streets.

We used to say nobody gets a party started like Approach, but really he should be closing them out. It’s hard to follow an act like Lincoln Marshall, the duo comprised of Approach and MilkDrop. The set was especially attractive on the final night of the festival during the Datura Records showcase because the two brought along guests to the stage (Louiz Rip) and kept the camaraderie high in the audience. They fully immersed themselves in the crowd, and it felt like any barriers between performer and audience was torn down (it was never there anyway). Throw in DJ G-Train’s expert skills, and you’ve got the cocktail for a perfect party.

Chess Club is another one of those up-and-coming punk acts in the scene, but you would hardly be able to tell because they come off like weathered veterans. Everything about their execution is perfection. They’ll spend half their songs as a delightful pop punk band before suddenly conjuring up their inner Gnarly Davidson in order to growl the rest of the tune away. What a thrill ride! There isn’t a single misstep in their performance, and their live shows are instant good mood-makers.

The Philistines are third-year veterans of the five-year festival, but they’re also becoming a familiar face in Lawrence. The Kansas City band of psych-rockers has spent the last year making the trek down I-70 for regular appearances in Lawrence, and it’s paid off. They’re one of the more alluring acts around, sporting various qualities anyone can get down with. You want sweet guitar riffs? Done. You want a wild drummer? Done. You want shrill screams, hair flips, and aaaaall the dance moves? Done. The Philistines are a must-see act in Kansas and should grace every festival stage.

Everything about the festival was fantastic, and every band approached the stage on top of their game. But believe me when I tell you, Bummer shut it down.

In what had to be the culmination of the weekend of excitement, Bummer proved once again to be the most disorderly bunch of the lot. Two days on, and our ears are still ringing from that set. The band abandoned the stage and set up on the floor in order to fully embrace their turbulent volume. What followed was the most raucous set to ever grace Field Day Fest in its five-year history. The crowd was a little timid at first, but eventually dove head-first into headbanging heaven. Bummer, who we are now certain were raised by wolves, encouraged every lawless act with a soundtrack to match.

Everybody needs a good Bummer set in their lives, a moment where you can truly riot and connect with your inner ruffian. Their set encompassed the very essence of a festival like this… a moment where all the bands are in between tours and can absolutely let loose, and a place where we can tell 2016 to go to hell. This is the point where Bummer collided with Field Day Fest and provided just that.