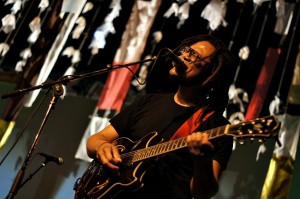 Cowboy Indian Bear is finally seeing the fruits of their labor, and it’s coming in the form of love and support from their community. They ended a tour at the Lawrence Arts Center on Friday to launch their latest album, Live Old, Die Young, a project that was three years in the making. The set was unique and featured the band as a nine-piece when they called upon musicians from other local outfits to help them launch and celebrate what has to be their finest work to date.

After a beautiful, horn and harmony-filled set from Spirit is the Spirit, Cowboy Indian Bear played the album front to back. The sound bounced off the walls of the theatre within the arts center, and the band showcased what years of hard work with pitch-perfect harmonies can do. 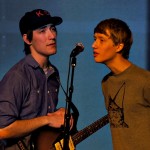 Joined by members of Quiet Corral and Y[our] Fri[end], the performance was a glorious example of unity within the local music scene. There were lots of heartfelt thank yous and dedications, which is how this band has always operated. They glide through life on respect and mutual admiration, and it’s a breath of fresh air (which is kind of what you need after a long, stuffy winter).

Cowboy Indian Bear is a band that is important to Lawrence because they lead by example. A few months ago, they played a packed show at a local venue, and put a brand new band on the lineup. Giving a new band a slot on such a big show is a grand gesture of generosity, and as I was leaving the Arts Center on Friday, I spotted the guitarist for that band in the corner, quietly singing all the lyrics to himself. This is the new generation, the new crop of musicians, and they’re in good hands when a band like Cowboy Indian Bear takes them under their wing.

Watch videos of performances from Spirit is the Spirit and Cowboy Indian Bear below, including an extended ending to “Seventeen.”